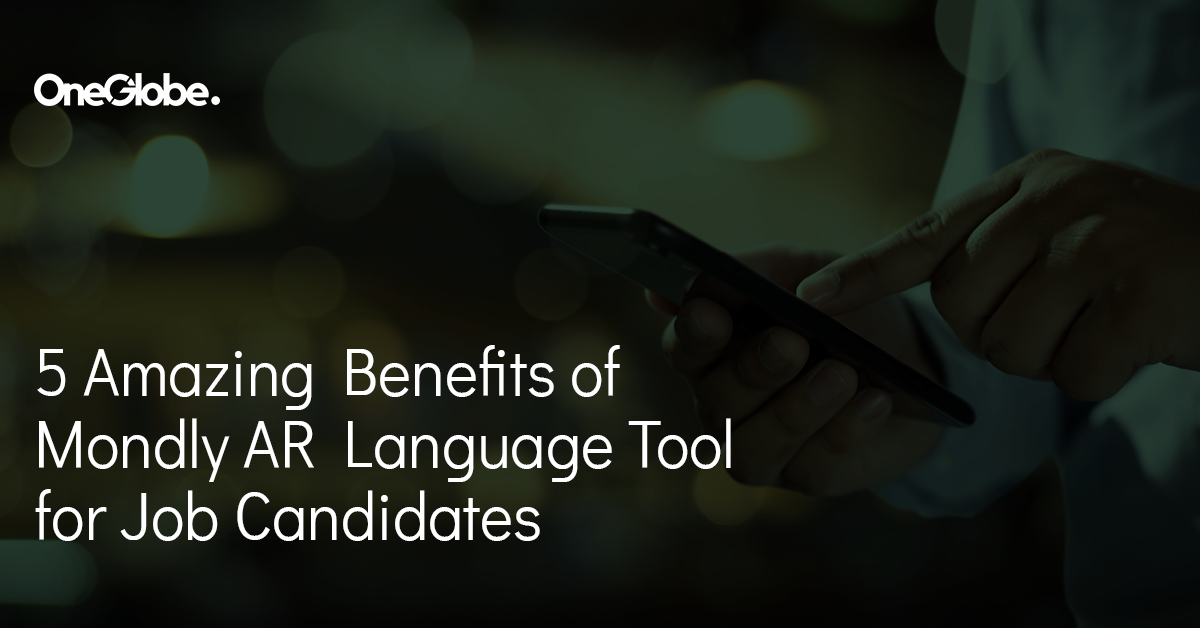 Using a language tool to learn new languages is always a net positive, whether you’re still a student or someone looking for a job abroad. Thanks to new technologies and the increased prevalence of immersive experiences, Augmented Reality (AR) has found its way into language learning. According to TechJury, 70% of people found AR to be highly beneficial thanks to how engaging the technology is. However, 32% of users also stated that the biggest hindrance to AR adoption comes down to the user’s experience (UX) of different apps.

Not every app is built on a solid foundation and people often find AR apps too confusing compared to their traditional counterparts. Mondly AR is the exception, however, as it represents a competent language tool that job candidates can use to learn languages more effectively. What is the role of AR in learning, and how can Mondly AR help you land a job position abroad more easily in 2022?

To start, we need to make a distinction between AR and Virtual Reality (VR) technologies which are often confused with one another. According to Merriam-Webster, AR stands for: “an enhanced version of reality created by the use of technology to overlay digital information on an image of something being viewed through a device”. In short, AR uses existing devices (smartphones and tablets) in conjunction with specialized apps like Mondly AR to display certain elements on the screen.

By using the device’s camera, an AR language tool like Mondly AR can allow users to learn by using their environments as a baseline and see new things around them. On the other hand, VR apps require dedicated peripherals such as Oculus Quest or HTC Vive Pro 2 to be used. AR is more affordable, compact, and dynamic as a platform for a language tool to thrive, especially for job candidates on the move. Here are a few great perks of using AR and Mondly AR as a language tool to expand your language proficiency:

1. Access to Over 30 Language Courses Built with AR in Mind

Different job candidates will need different languages from their learning apps. However, many apps are limited in the languages they offer, not to mention the general lack of AR features to go with them. But, Mondly AR stands out as an exception, as it currently features 31 languages that you can learn right now.

Some of the languages include Spanish, both American and British English, Arabic, Korean, as well as Croatian and Greek. With over 30 languages to choose from, you will have an easier time learning and adjusting to a new language before landing a job abroad. Expanding your CV with new language proficiency skills will also make you more appealing to prospective employers around the world.

The great thing about using an AR language tool is the fact that you aren’t limited by your physical space for learning. AR technology is built with the idea of “augmenting” your surroundings with the help of your camera. As such, Mondly AR can be used from home, in a coffee shop, in a park, or even when you travel abroad to an entirely different environment.

This means that you can learn new languages whenever, wherever you are – all you need is your trusty smartphone or tablet device. Mondly AR is built much in the same way as Mondly itself with the reliance on daily lessons and bite-sized learning experiences. Whenever you’re tired or had enough for that day, all you need to do is revisit Mondly AR a day, a week, or a month later and pick up exactly where you left off.

Mondly has taken extra care to create a believable chatbot AI which you can use through the Mondly AR language tool. This chatbot partner is designed to facilitate lifelike conversations in every one of the 31 languages currently featured on Mondly.

Once you open Mondly AR and select your lesson, you will be greeted by a virtual assistant who will help guide you through your lessons. A language tool featuring a speaking assistant which can help with your pronunciation while learning isn’t something you can come by easily. It’s why Mondly AR stands out from the competition and continues to develop its services for the benefit of job candidates such as yourself.

4. Take Gamification to the Next Level with AR Learning

Gamification has proven to be an excellent motivator for students around the globe when it comes to engagement. According to published findings, 67% of students found gamified learning far more engaging compared to traditional curriculums. Challenge-based gamification has resulted in a 34.75% increase in students’ performance thanks to game-like learning which is highly relevant to Mondly AR.

Mondly, Mondly AR, and Mondly Kids all feature gamification as a means to encourage learners to stick with their language courses. You can use Mondly AR learn and see the progress of your learning experience through its gamification features. This will encourage you to learn more and start seeing the results of your learning manifest in the form of new language skills.

5. Learn at Your Own Pace, Either Casually or Regularly

Using Mondly AR as a language tool is a journey in itself. Once you decide on which languages you’d like to learn, the app will go out of its way to accommodate your learning style. You can use Mondly AR as much or as little as you want to depend on your other obligations, such as if you’re looking for a job.

Learning at your own pace is exactly why you should use Mondly and Mondly AR, as the app doesn’t force a schedule onto you. While you can stick to a daily schedule if you choose to, it is in no way required to take full advantage of the app. Simply pin it to your smartphone’s or tablet’s home page and check it out whenever you have a few minutes to spare. Before you know it, you will spend hours on Mondly and its intuitive AR learning features.

Mondly AR Language Tool as the Next Step in Your Development

Whether you want to learn German, Italian, French, or improve your English, Mondly AR is a great language tool to pick up. You will be able to attain valuable language skills well in advance of finding a job abroad and increase your odds at attracting great prospective employers.

Job candidates who use Jobs OneGlobe to find work can benefit greatly from checking out OneGlobe Language Learning. There are numerous benefits to using it as your language tool of choice, as you can gain access to Mondly AR, Mondly Kids, and main Mondly services for language learning. With these tools at hand, nothing will stand in your way of attaining new language skills and developing your career further.