Why Should you Learn a New Language with Mondly as an Employer? 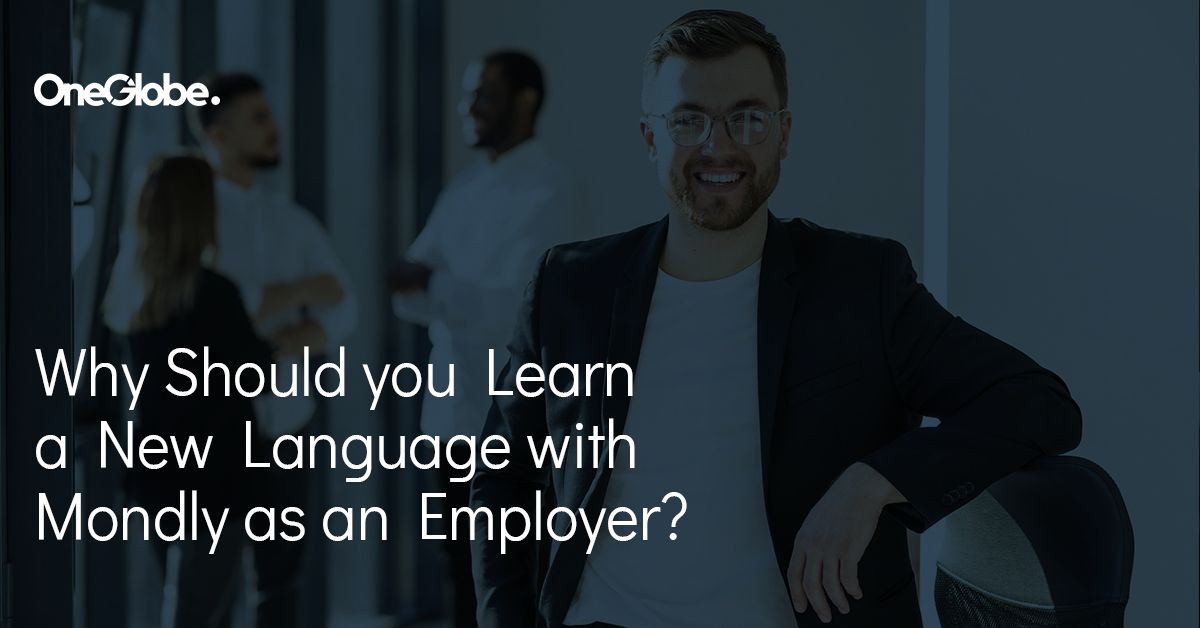 We live in an international world, where businesses collaborate with overseas partners and hire employees from abroad on a daily. According to Smart Brief, about 20-25% of world’s population speaks English, however only a small percentage of that are native-level speakers. Despite English being the modern lingua franca, 54% of US employers use foreign languages to communicate and operate with overseas stakeholders.

Spanish, German, French, and other languages are being used in the corporate sphere more with each passing day. This has prompted many business owners and employers to learn a new language and make the most of what the market has to offer. By relying on OneGlobe Language Learning and picking up Mondly, your business can start to thrive from working with international candidates and business owners alike. What is Mondly all about and how can it help you learn a new language effectively for the benefit of your company in 2022?

Perks of Learning a New Language for your Business

Let’s start by discussing foreign languages and the perks of learning them. According to Forbes, the three most marketable foreign languages for international businesses are Spanish, Chinese (both Mandarin and Cantonese), and French (with French Canadian). As you can see, even though English is very popular and widely-renown for its accessibility, more and more businesses are turning to other options. You can never know if a potentially lucrative client or a highly-talented job candidate will be a native English speaker. They might just speak a different language and you’ll have to adapt on the spot if you want to retain them as valuable stakeholders.

Learning Italian, Russian, Greek, Dutch, or other languages can significantly expand your business’ reach. While you’ll have to learn a new language gradually, using Mondly on a daily can help you achieve that goal fairly easily. By learning a foreign language or two, you will open your company to a wide range of international business perks, including but not limited to:

Using Mondly to Learn a New Language as an Employer

40+ Languages Available for Your Learning Convenience

There is a common misconception about how long it takes to learn a new language properly. This is even more prevalent with less popular language choices like Japanese, Greek, or Arabic due to their higher complexity compared to Romance languages. Mondly is designed to accommodate for over 40 different languages which you can start learning right now. Some of them include Norwegian, Romanian, and even Finnish, Persian, and Thai.

As a business owner, you can gain significant insight into each of these languages for your company’s benefit. You will be able to learn a new language dynamically and at your own pace while focusing on the exact areas you are lacking in. This is a far more accessible and user-friendly approach to learning new languages because it skips over the tedium of learning grammar rules or writing by hand. Mondly cuts straight to the point and enables you to master 40+ languages through its platform.

As an employer, you will likely be short on time and lack the focus or energy to spend hours learning a new language every day. Mondly is designed with the understanding that its users are busy and that they can’t spend countless hours on end learning.

Its bite-sized lessons are uniquely created to allow for short bursts of learning. Whether you’re commuting, taking a break, or have a few minutes to spare before bed, Mondly will let you learn a new language at your own pace. When you do have more time to spend, you can simply increase the intensity of your learning.

Mondly features several accessibility options when it comes to speaking exercises. The team behind Mondly understands that speaking exercises are an integral part of learning new languages and has integrated chatbot functionality into its app.

When you download Mondly on your Android or iOS device, you will be able to take advantage of Mondly Hands-Free in addition to using the platform’s chatbot. You can use this virtual assistant to have conversations which mimic real-world situations and scenarios you may find yourself in someday. This is a great feature for business owners and recruiters who will likely have to speak to international stakeholders on occasion.

While we’ve said that the English language isn’t as popular as it once was, that still doesn’t diminish its value. Employers and recruiters around the globe can still benefit significantly from learning to use English more efficiently. Mondly has partnered with Oxford University Press to provide its users with certified English proficiency tests which can help gauge your English skills.

These tests can prepare you for taking actual tests by ranking your proficiency level from A1 to C2. Knowing where you currently stand on the CERF scale will help you prepare for exams more efficiently and nail your tests on the first try. Mondly also features its own dedicated English language course, making learning a new language or improving on it that much easier.

To learn a new language properly, you’ll need to be engaged with whatever study materials or app you use. To accommodate for that, Mondly has implemented a wide range of gamification features into their web-based platform and mobile apps.

Learning with Mondly is akin to playing a vibrant, exciting video game. The tool will react to each click you make and make you feel like you’re achieving a lot by working through its lessons. Star ratings and other rewarding elements are implemented in its UI and will ensure that you are convinced to do “just one more lesson” every day. This is everything you could hope for in a well-designed language learning app.

Additional Value in the Form of Mondly Kids and Mondly AR

Lastly, you can take your learning beyond Mondly with its additional apps – Mondly Kids and Mondly AR. Mondly Kids is designed to help the youngest of us learn a new language intuitively and through light play and exercise. The app is made to be eye-catching and it will assuredly keep your child busy for hours as they work through lessons.

Starting to Learn a New Language with Mondly in 2022

While it will take a bit of time for you to learn a new language as an employer, it can pay off for your business tenfold. Your business culture will thrive as you expand your language skills and you will become far more appealing to international stakeholders moving forward.

Meanwhile, you can check out Jobs OneGlobe and post your job listings to attract employees from around the world to your company. Greeting your new hires in their own language and helping them onboard and move abroad to you will be seen as a major positive. Not only that, but you will effectively create an inclusive, diverse, international working environment in a matter of months. Make the decision to learn a new language today and reap the rewards of doing so throughout 2022 and beyond.