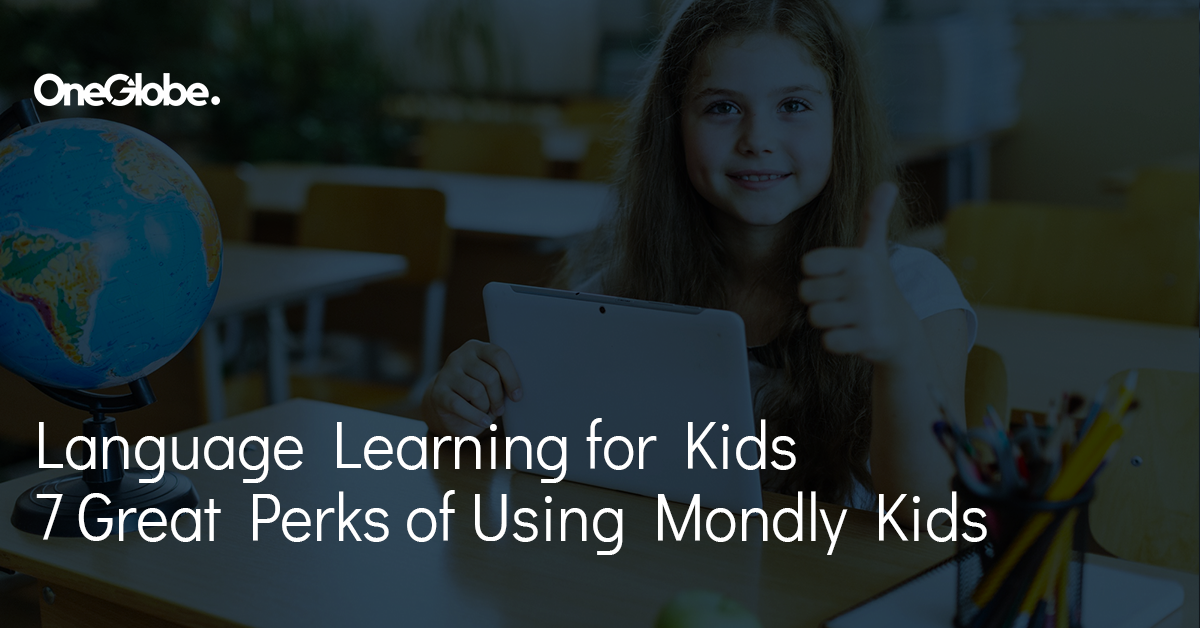 Learning a new language is always beneficial, regardless of someone’s age or profession. For kids, language learning can be especially important because it can expand their global horizons and worldviews at an early age. According to a study done by Michigan State University, the brains of young kids aged 0-3 are primed to learn a second language. According to the study, this can promote excellent bilingual handling of secondary languages in kids as young as 6 months old.

Of course, language learning for kids has to be adapted to the children who will ultimately learn new languages – which is where Mondly Kids can be introduced. Mondly Kids is a learning platform and app specifically designed with young children in mind with its features and visual presentation. What are the reasons to introduce Mondly Kids to your children, and how can they benefit from Mondly Kids more than from any other language app?

Reasons to Encourage Language Learning with your Kids

Before we discuss Mondly Kids and its perks, let’s briefly touch on why kids should learn languages as early as possible. According to Science Direct, children as young as 5 can learn and process up to five different languages. The rate and success at which they can properly pronounce different words, annunciations, and intonations, as well as read and/or write will naturally vary. However, their language learning can be bolstered by having them use learning apps like Mondly Kids from an early age. Here are a few great reasons to encourage your kids to pick up learning new languages sooner rather than later:

One of the best things about Mondly Kids is the fact that it features 33 different languages for learning at the time of writing this piece. Whether you plan to move abroad with your kids or simply want to help them become bilingual at an early age, Mondly Kids will help you. Here are the top languages based on popularity in Mondly Kids:

Mondly Kids features a plethora of other languages such as Russian, Korean, and even Dutch and Portuguese. Using Mondly Kids on a daily will ensure that your child can grasp basic concepts, words, and phrases from a foreign language by simply playing around in the app. Make sure to download the app for your kids as early as today to introduce them to foreign language learning early in life.

2. Simple to Use and Easy to Love Thanks to Its Kids-Centric UI

If you’ve ever worked with kids or have children of your own, you know how difficult it is to focus their attention for even a few minutes at a time. The younger the child is, the more colorful, eye-catching, and dynamic the game has to be to hook them – Mondly understands this. Mondly Kids is designed to be intuitive, captivating, and engaging for a younger audience from the get-go.

All you need to do is download the app from Google Play or the Apple App Store onto your smartphone or tablet device. The app will quickly guide your child to its language selection interface where you can assist them in setting up the UI. Once it’s set up, Mondly Kids won’t require you to constantly monitor your child’s language learning due to its kids-friendly options and design methodology.

Speaking of short attention spans, good luck trying to make a child learn a foreign language for an hour or two at a time without proper audio/visual stimulants. Kids are attracted to visually-appealing games, apps, cartoons, and other digital media – the same applies to real-world toys.

However, to make the most out of your kids’ language learning experience, Mondly Kids features daily lessons which are bite-sized and easy to manage. Your child will never be forced to do extraneous tests or listen to hours-long lectures which more often than not devolve into one-sided monologues. Instead, Mondly Kids and its daily lessons are there to boost your child’s engagement and pique their curiosity.

As adults, we don’t mind learning a new language through grammar, writing, and oral exercises. However, kids need a little more stimulant than that most of the time. Mondly Kids is designed to allow for a very organic and approachable foreign language learning style.

Its lessons are organized around basic topics like animals, fruit and food, or family and nature. By selecting one of those categories, your kids will be able to learn about what they want, when they want, and how they want. Mondly Kids understands that children learn and develop differently than we do and facilitates a more fun and interesting way of learning. This is especially useful for parents who are looking for jobs abroad and want to guide their child toward a foreign language organically and without forcing anything.

Kids aren’t particularly fond of reading to learn new things – oftentimes, they’re also too young to read entire paragraphs of text. This is why learning via multimedia content is the optimal path to take with kids learning foreign languages. Mondly Kids created a repository of high-quality audio materials in collaboration with professional native speakers for each of its courses.

This means that your child will be able to learn new languages simply by listening to the speaker and comparing what they hear to the displayed text and images. This is an amazingly intuitive way for children to learn not only new languages but anything else you might want to teach them. Mondly Kids will make it deceptively easy for your kids to embrace new languages through enjoyable everyday playtime and engaging multimedia.

6. Gamification Features Which Can Entice and Entertain Kids

Gamification is at the heart of numerous modern apps and has even found its way into some aspects of formal education over the years. Today’s youth is more exposed to video games than any other generation before it, making gamification a natural next step in education development. Mondly Kids is a learning platform that embraces gamification in the way it organizes lessons for children.

Language learning is so much more interesting and fun if you’re constantly gaining points, filling bars, and following daily streaks. Also, children love being rewarded for their actions, even small ones. Mondly Kids features a very reactive, intuitive UI which presents kids with “job well done” sounds and imagery whenever they finish certain lessons. This can make language learning enticing even in the long run, which will manifest in your kids learning new languages simply by using Mondly Kids.

Cognitive development refers to the way kids’ ways of thinking and problem-solving develop at an early age. Nurturing your kids’ cognitive development with language learning can make them far more attuned to academia going forward. They can be encouraged to “learn for fun” whenever they have the time to spare, and this can easily be done by introducing Mondly Kids into their daily routine.

Mondly Kids is designed with the intent to help monolingual children become bilingual through cognitive development-centric content. The app rewards children for using it and lets them know that it’s okay to learn new languages. Mondly Kids isn’t a video game but it is colorful, cheerful in its visual design, and geared toward the youngest of us. Every parent, teacher, and caretaker should consider using Mondly Kids for the language learning of their young ones in 2022 and beyond.

Early-Age Growth and Development through Languages

Promoting learning new languages at an early age can pay off for your kids significantly in just a few short years. Whether they’re children of mixed parents, live in a predominantly international country, or simply like to learn through play, try introducing them to Mondly Kids. It is a free, easy-to-use, and user-friendly way for children to learn English, Russian, Chinese, German, or any other language from its assortment of 33 (and counting) options.